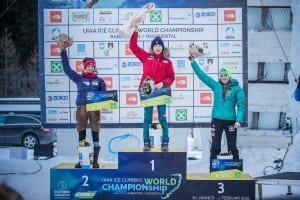 The two best ice climbers in the world, the Russian Maxim Tomilov and the Korean Hee Yong Park fought an exciting duel and thrilled the more than 1000 spectators when they reached the top, the end of the route. Tomilov’s attempt was ten seconds faster and so he now celebrates the first World Championship title in his career. His brother and defending champion Alexey came third, completing the joy for the Tomilov family. 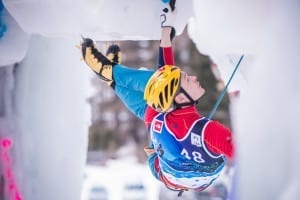 “I am delighted that I won the World Championship title. It is incredible, especially as I was only ten seconds faster than Park”, said new World Champion, Maxim Tomilov.

As for the men, three women reached the top in the women’s final. The fastest was Woon Sheon Shin who took over the title of World Champion from Angelika Rainer. “In the last World Cup in Saas Fee I didn’t make the final. I was very upset about that. I am all the more happy now that I am World Champion. I cannot believe it”, Shin commented.

Following three gold medals, Angelika Rainer won silver this time. The 28 year old from Merano was happy with the result. “To climb before your own audience is lovely, but it also put me under a lot of pressure. I climbed right to the top. I cannot blame myself for anything. Shin just happened to be a little faster today”, said Rainer.

Petra Klingler from Switzerland came third. The nearly 23 year old from Bonstetten near Zurich was the slowest of the three ice climbers who reached the top in the final route. “I am very happy. I reached the end of the route. So I did not make any mistakes”, Klingler commented.

Next to Angelika Rainer Barbara Zwerger was the second South Tyrolean to reach the final. The 42 year old from Bozen made a respectable seventh place. “Getting to the final was a good result for me. In the final run I gave my all. I may have reached a higher place if I had understood a little sooner how to take one of the handles. But this result is fine”, said Zwerger.

The final in the World Cup speed climbing took place on Saturday evening. The Russian team pulled out all the stops with the result that the geographically largest country in the world won all the podium places.

Among them men Vladimir Kartashev won first place, climbing the 15 metre high ice wall in an astonishing 9.61 seconds. Kartashev was 0.02 seconds faster than Nikolay Primerov. Egor Trapeznikov was the third Russian to complete the climb in under 10 seconds.