The Ice Tower Rabenstein is ready for action

Bolzano/Corvara, 26 January 2017 – Over the coming weekend the small village of Corvara in Val Passiria becomes the Mecca of the international ice climbing scene. From Friday 27 to Sunday 29 January the Eisturm Rabenstein is the site of a World Cup event where the whole of the ice climbing elite is at the start. A total of 100 ice climbers from 20 countries and three continents have registered.

The Ice Climbing World Cup 2016/17 is approaching its conclusion. The event in Corvara is the one but last stop this winter. Because of this, a good result is becoming more and more important; after all, it’s about the overall victory. With the World Championships just around the corner, it’s also important that the athletes are fighting fit. The title fights in France begin just one week after the World Cup in Corvara, which makes the South Tyrolean event almost the dress rehearsal for the World Championships. 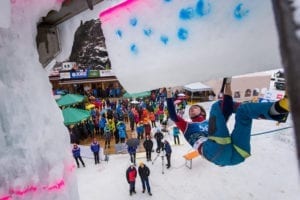 South Korean Hee Yong Park arrives at Corvara as World Cup leader in the lead category. The reigning runner-up World Champion in the overall ranking is being closely chased by the Russians Nikolai Kuzovlev, World champion Maxim Tomilov, and Alexey Dengin. In fifth place in the overall ranking is Yannick Glatthard from Switzerland, who came second last year in Corvara behind the surprise winner Janez Svoljsak. Park has previously only won once in Corvara. It was in 2012 when he won the last edition of “Icefight”. Since then, Val Passiria has become the venue for the World Cup, and he came second twice (2013, 2015) and third once (2016).

Rainer has been waiting for a home win since 2013 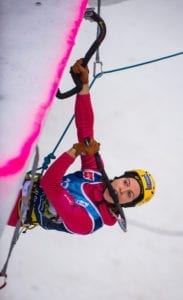 It’s different for the women. The last two World Cup events in Corvara were won by competitors from South Korea. Last year’s event was won by Han Na Rai Song, in 2015 Woonseon Shin became World Champion. Song arrives in South Tyrol as the overall leader; Angelika Rainer from Merano is in second place in the overall ranking. The 30‑year old has been waiting for a home win since 2013. At the World Championships in 2015 Rainer came second, last year the three-time ice climbing World champion lost her footing in the final and ended up in fifth place. Angelika Rainer proved her fitness last weekend in Saas Fee, where she came second for the second time this season. She will now aim for a first World Cup victory before a home crowd this winter.

In the speed discipline two Russian winners are highly likely. In men’s competition the first 10 in the overall ranking are athletes from the geographically largest country in the world, in the women’s event the Russians are currently in the first five places.

The Südtirol-1-Clubbing with DJ Patex at the Piazza Terme in Merano on Friday from 5:00 pm is the first highlight of the three-day sporting bonanza and the opening celebration of the South Tyrolean ice climbing event. Ice climbing is also part of the opening ceremony: The fastest ice acrobats in the world will stage a public show-fight, climbing on the 15 metre high mobile ice tower that is open to the public from 1:00 pm.

On Saturday and Sunday the focus shifts to the ice tower Eisturm Rabenstein. The programme starts on Saturday at 9:15 am with the men and women’s Lead qualification rounds. The early afternoon starts with the women’s semi-finals (2:00 pm), followed by the Speed qualifications (from 4:30 pm) and ending with the finals (from 6:30 pm). Sunday starts at 8:15 am with the men’s Lead semi-finals, the start gun for the finals is scheduled for 1:00 pm.

Competitions will be live streamed

The daredevil para-glider acro-show flights by the Lorit-team from northern Tyrol, an exciting competition in beer-crate climbing and the spectacular attempt at a speed record with the eight fastest ice climbers in the world (last year’s result of 16.6 seconds is waiting to be broken), are the highlights of Sunday’s supporting programme. DJ Fill also will ensure right sound, the team of moderators the right atmosphere, and there will be plenty of food and drink.

For those who cannot come to Corvara, the competitions will be live streamed on the website of the international climbing association UIAA: https://www.youtube.com/user/uiaabern