Bolzano/Corvara, 29 January 2017 – Hee Yong Park and Han Na Rai Song are this year’s winners in the lead category of the Ice Climbing World Cup in Corvara. The two Asian climbing champions were in a class of their own when they won the event and the overall World Cup ranking in front of over 1000 spectators. Local athlete Angelika Rainer (Merano) had to content with sixth place.

The Lead finals on Sunday afternoon were not for the faint hearted. The two demanding routes the route builders had thought up for the final race demanded everything from the international ice climbing elite. Not surprising, therefore, that in the men’s competition, only a single athlete made it to the end of the route and to the top of the ice tower. Hee Yong Park, reigning runner-up World Champion, reached it just one second before the end of the time limit of 7.30 minutes.

For Park it was the third stage victory which meant he also won the overall World Cup. The likeable public’s favourite from Asia relegated World Champion Maxim Tomilov and his compatriot Nikolai Kuzovlev to 2nd and 3rd place. Both failed just below the top. Last year’s winner Janez Svoljsak (Slovenia) missed out in the final qualification in the semi‑final by just a few seconds and came ninth. The best from the semi-finals, Yannick Glatthard from Switzerland, came seventh at the ice tower Eisturm Rabenstein. 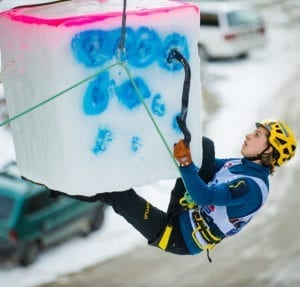 Among the women many of the spectators from all over South Tyrol were hoping for a home win by local athlete Angelika Rainer. After top performances in the qualification round and the semi-finals, the 30-year old misjudged a grip which cost her a lot of time, and finally lost her footing. At the end the three times World Champion made sixth place. Rainer was however able to celebrate her second place in the overall ranking.

Six Russians in a row in the Speed category

The Russians confirmed their status as the fastest ice climbing nation by winning the first six places in both Speed competitions. For them, Pavel Batushev claimed victory in an extremely tense and close battle. The athlete, who had come third last year, conquered the 15 vertical meters in 9.23 seconds, a mere 0.01 second before overall World Cup winner Vladimir Kartashev. Egor Trapeznikov was happy with third place.

The organisers and the South Tyrolean ice climbing crowd were delighted that 2 young athletes from Corvara also competed in the finals, Christof Pfitscher (14th /13.71) and Hubert Brunner (17th/14.68). Third local athlete, Stephan Pfitscher (22nd) lost out in the qualification round (15.43).

The women’s competition was won by Ekaterina Feoktistova with a time of 11.65 seconds. Maria Tolokonina, winner in the discipline ranking, came in second place (12.48), third was Ekaterina Koshcheeva (13.16).

Thanks from the Chair of the Organising Committee

“I would like to thank all our volunteers for their tireless efforts during the two days of the competition, and also during the planning stage of this sporting event. My thanks also go to the mountain rescue team of the Guardia di Finanza Merano, which ensured the safety of the athletes. And finally, I would like to thank in particular our sponsors. Without their support this event would not be possible. I hope that we can rely on your support also in the future,” concluded Reinhard Graf.

The ice tower Eisturm Rabenstein will be available to athletes on Monday for training purposes,  who will be able to climb the demanding routes again. On Tuesday the ice tower will be open again to the public, from 7 pm to 10:30 pm. 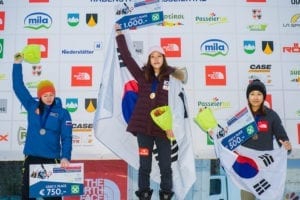