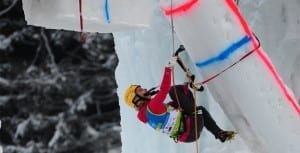 Four times already the best ice climbers in the world have been our guests at the ICEFIGHT in Corvara/Rabenstein in Val Passiria/Passeiertal. For the event’s fifth birthday this weekend the organisers of this top class ice climbing competition get their best present: for the first time the competition is a World Cup event.

Everyone who is someone in ice climbing will get together on Saturday and Sunday in Corvara in the Val Passiria valley when climbers fight for victory in the very first ice climbing world cup. Among them the two reigning world champions in difficulty climbing: the Russian Alexey Tomilov and Angelika Rainer from Merano. Or the winners of the last world cup event in Saas Fee in Switzerland, Maxim Tomilov and Maria Tolokonina (both from Russia).

Also participating will be former world champion Heeyong Park (South Korea) and Anna Gallyamova (Russia) who won last year’s ICEFIGHT in Corvara. Also at the start is the double former world champion Markus Bendler from Schwendt in North Tyrol, who has three times occupied the first place on the podium at the foot of the Passo Rombo pass. Naturally, the elite of speed climbing is also represented. All in all some 100 ice climbers from 17 nations will gather in South Tyrol.

The weather present the organisers with a real challenge

The fact that there is an ice climbing World Cup in the Val Passiria is largely due to the ever active OC-team headed up by Reinhard Graf. For the last four years they staged highly impressive World Cups that have acquired an outstanding reputation. The Alpine Association was ably assisted in the talks with the international climbing Association UIAA by the competent and experienced negotiation partner “Eisturm Rabenstein” Association.  Together the enormous World Cup project was agreed on in the autumn of 2012.

In the last few weeks the OC-team had to cope with more than organisational challenges. The far too warm weather at the beginning of January gave Reinhard Graf and his team major headaches. Within just a few days the foehn melted the ice giant down to a skeleton of steel and concrete.

From around 10 January the weather turned considerably colder and the OC-team began with a round the clock production of ice and sculpting of the tower, the possibly most beautiful but certainly most demanding artificial ice climbing facility in the world will be ready on time this Saturday, 26 January, and will be bringing the ice acrobats to their own limits. 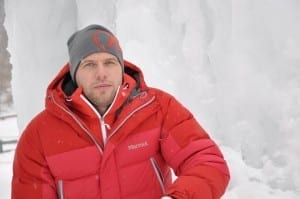 “The best ice climbers in the world can come to Corvara. Everything is ready. We have done everything we needed to be good hosts from Friday to Sunday. We now wish every athlete that he can give his full personal best and that the many spectators will enjoy a spectacular competition. We are so delighted that it is all finally about to start”, said the head of the OC Reinhard Graf.

Opening on Friday at the Terme square in Merano

The Ice Climbing World Cup will be opened on Friday with a large party at the Terme square in Merano. The opening ceremony begins at 5 pm with plenty of music including a gig by Doggy Dorfmann and a variety programme (fashion show, spectator climbing, show-competition). Between 6pm and 7pm the start numbers will be drawn by lots. On Saturday 26 January at 9 am the qualification climb for the difficulty competition begins. At 3 pm it’s the women’s semi final and at 7 pm the qualification for the speed climbing.

The head of the OC-team, Reinhard Graf, concluded: “Last year many ice climbing fans came to Corvara. We are hoping that this World Cup event will bring even more spectators to the Val Passiria. Everyone is very warmly welcome to watch this spectacle and the athlete’s sporting achievements free of charge at close range.”