Angelika Rainer wins the World Cup in her home country 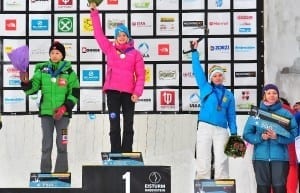 In bright sunshine and icy cold temperatures the winners in the difficult climbing discipline in the ice climbing World Cup were identified on Sunday afternoon in Corvara/val Passiria. To the delight of her many fans the triple women’s World Champion Angelika Rainer from Merano took the victory. Among the men the Russian Maxim Tomilov won his competition.

There was much pressure on Angelika Rainer’s shoulders in the final of the eight best ice climbers.  The 26 year old from Merano coped well with that pressure. In the final she mastered the spectacular route with a fastest time of 6.46 minutes before the Korean Woon Seon Shin (7.17) and the Russian Maria Tolokonina (7.23). Already in the semi final Rainer had delivered the best climb in Corvara after having achieved 5th place in the qualifying round. 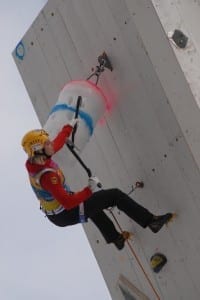 For Rainer this was the second World Cup win in the current season. Two weeks ago she won in Cheongsong in Korea and claimed the Word Championship title for the third time, last weekend she achieved a close second place in Tolokonina. “I am naturally overjoyed that I made it here. The pressure was very high, everyone thought that I could win, yes, that I must win. I am in excellent shape and I have achieved everything I had planned for today. In the last events in Romania and Russia I can simply do what I’m best at – just keep on climbing”, said Angelika Rainer after the competition before an impressive number of spectators at the foot of the Rombo pass.

Barbara Zwerger, the second South Tyrolean in the difficulty final achieved eighth place. Zwerger, from Bolzano, was unlucky in the final route when a lump of ice in which she had tried to secure her ice pick came loose during her climb. 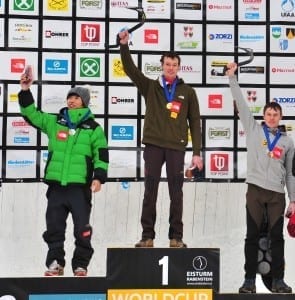 In the men’s competition two ice climbers reached the end of the route. The fastest among them was Maxim Tomilov (7.35 minutes), who also won last week in Saas Fee in Switzerland. Second place went to former World Chamption Hee Yong Park from South Korea, who was a whole eight second slower than Tomilov. Behind Park came another Tomilov: Maxim’s brother Andrew, the current World Chamption, came third.

Markus Bendler, who lives in Schwendt in North Tyrol but who started for the AVS South Tyrol, achieved fourth place. 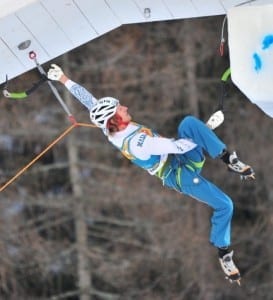 For Bendler, the World Cup in Corvara marked the end of this career. He will now put all his considerable energy into his new career – the two times former World Champion will open a sports shop in March.

Herbert Klammer from Lutago failed to make the qualification for the final. The 37 year old from valle Aurina achieved a respectable tenth place among the world elite of this sport, that is fighting to be included in the Olympic programme in 2014 in Sotschi.

The Association Eisturm Rabenstein who were the magnificent organizers of  the mega project World Cup, were also very happy. “I think we have organised a super event. Every year more and more visitors come to us in the val Passiria. This is a sign that they like the spectacle presented by the world’s best ice climbers. I would like to thank the Alpenverein South Tyrol as supporter of the event for their excellent cooperation, as well as our sponsors for all their support. I would also like to thank my colleagues from the Association and the innumerable volunteers who ensure from year to year that everything runs smoothly”, concluded OC-Manager Reinhard Graf.