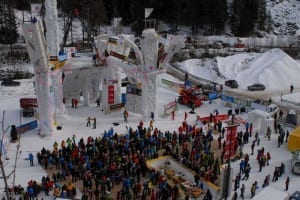 Rabenstein/Passeiertal, 8 January 2014 – In exactly one month, from 7 to 9 February, the best ice climbers in the world will be gathering again in the Passeiertal valley in South Tyrol. For two days they compete on the ice tower Eisturm Rabenstein, one of Europe’s most beautiful and demanding artificial climbing structures, in the disciplines of Lead (difficulty) and Speed, hoping to gain important points towards the overall ranking.

After its debut last year the UIAA Ice Climbing World Cup comes to Rabenstein for the second time, from 7 to 9 February. The event is also the final rehearsal for the World Championships 2015 which the International Mountaineering and Climbing Federation UIAA has  allocated to the Club Eisturm Rabenstein. The elite of ice climbers will find even better conditions at the World Cup in February than last year. At the end of December the new club house with modern changing rooms, a meeting room, a bar and many other facilities was officially opened.

“Thanks to our new infrastructure the conditions are ideal. Everyone who has a part in ensuring the success of the World Cup can now work in excellent conditions. This was also necessary with a view to the Word Championships 2015”, said the President of the Organizing Committee Reinhard Graf of Club Eisturm Rabenstein.

The organisers are strongly supported in their efforts by the Association Alpenverein Südtirol and together they return to tried and tested concepts for the second Ice Climbing World Cup here. The big sporting event will be opened on Friday 7 February at the Thermenplatz in Merano. As part of the early evening opening ceremony there will again be the mobile ice tower where all visitors have the opportunity to have a climb and to discover just how difficult ice climbing is. 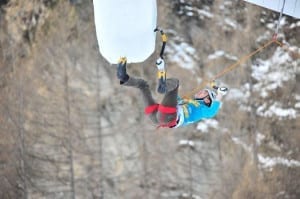 The competitions in Rabenstein on Saturday 8 and Sunday 9 February in which over 130 athletes from 20 countries participate, will again be a magnet for some 2000 visitors to the Passeiertal valley. Saturday daytime is given over to the qualifications for the speed competition, the speed climbing finals will take place from 8 pm in the evening. Sunday is the day of the semi-finals (8:30 am) and the final round for victory in the difficulty climbing (1 pm).

Last year all the winners at the ice tower in Rabenstein had been the favourites. In the men’s difficulty climbing the Russian Maxim Tomilov won ahead of the Korean overall World Cup winner Hee Yong Park and Maxim’s brother, Alexey Tomilov, the current World Ice Climbing champion. The women’s competition was won by local resident Angelika Rainer from Merano, who had just previously won the third World Championships title in the series and had come to Rabenstein as the new champion. Rainer won ahead of the South Korean Woon Seon Shin and the Russian Maria Tolokonina  who went on to become the overall World Cup winner.

The speed climbing was a Russian only affair. In the men’s competition the winner was Pavel Gulyaev, in the women’s the day was carried by Maria Krasavina.