Only 100 days to the Ice Climbing World Championships 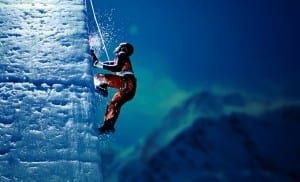 Rabenstein/Passeiertal, 22 October 2014 – The Ice Climbing World Championships in Rabenstein from 30 January to 1 February 2015 are coming closer. The title fights in the Passeiertal valley are one of South Tyrol’s winter sports highlights in the coming season.

In Sölden, only a few km from Rabenstein as the crow flies, the Alpine Ski World Cup with the first two giant slalom runs of the season 2014/15 begins this weekend. Rabenstein needs to have a little more patience for its winter highlight. On Wednesday it will be exactly 100 days to the start of the Ice Climbing Word Championships in the Passeiertal valley.

From 30 January to 1 February 2015 the best ice climbers of the world will display their climbing skills over a period of three days. Local resident Angelika Rainer and others will be competing on what is one of the most demanding artificial ice climbing facilities in the world. In December 2013 the multi-purpose building with changing rooms, a restaurant, garages, equipment stores, offices and conference room was opened. Since then, to the delight of top athletes, the tiny village with its 230 inhabitants has been offering everything required of an international ice climbing hotspot.

For more than three months preparations for this large scale event have been running at fever pitch. “The basic planning stage has been completed. We have been working hard throughout the summer to ensure that the World Championships run smoothly. The mood in our team is fantastic and the general public is very interested in the event. People often ask me about the Word Championships. This is a very good sign, as it shows that the whole of the Passeiertal valley support the event. And that makes us very proud!” explains Richard Graf, Chair of the Organising Committee.

While this is the first time Rabenstein is organising World Championships, it is already highly experienced in staging large scale international ice climbing events. Every year from 2009 to 2012 the ICEFIGHT took place here. Although this competition was not an official World Cup event, all the great and good in the ice climbing scene took part in this closed competition. In 2013 the ICEFIGHT became one of the UIAA World Cup events. After a successful premiere the second edition, and therefore the last event before the Word Championships, had to be cancelled in February this year due to the large amount of freshly fallen snow. The optimistic Organising Committee believes this to be a good omen for the World Championships! As they say: A failed final rehearsal makes for a successful premiere.