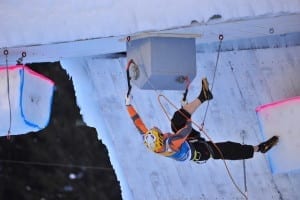 Rabenstein, 28 January 2015 – In two days’ time and after intense preparations the party finally begins. The ice climbing World Championships will be opened with a lively celebration at Piazza delle Terme square in Merano. On Saturday and Sunday competitors climb for the World Championship title at the Eisturm Rabenstein in the Passeiertal valley. The three day long ice climbing party is ready to start.

Everything is prepared for the South Tyrolean ice climbing festival that opens this weekend in Merano and then takes place in Rabenstein in the Passeiertal valley. Route builders Attilio Munari, Loris Manzana and Khim Yong Heon have been working on the tower since Monday, preparing the extremely demanding routes on which the world’s best ice climbers will fight for the World Championships medals.

103 athletes from 19 countries and three different continents will participate in the World Championships in Rabenstein. The village at the foot of the Passo Rombo with its 230 inhabitants will be transformed and acquire an international flair during the largest sporting event of the Passeier season. And with Angelika Rainer from Merano a South Tyrolean will even compete for victory. The 28 year old is not only the reigning champion, she also won the last three World Championships and is hoping for a fourth gold medal. Rainer is not the only competitor from South Tyrol, there is also Barbara Zwerger from Bolzano. For the men, the defending champion is Alexey Tomilov from Russia. 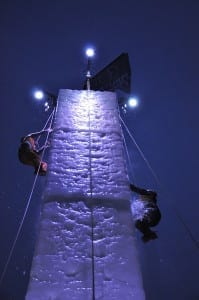 On Friday 30 January the competition will be formally opened on Piazza delle Terme square in Merano. The day starts at 10 a.m. with an opportunity for anyone to have a go at climbing the 15 meter high mobile ice tower.

From 3:30 p.m. presenters Martin Böckle (Editor’s note: who already entertained the crowds at the Biathlon World Cup in Anterselva last week) and Deborah Sparber (Radio Tirol) accompany the audience through the afternoon and evening. The programme includes a live performance by Peter Santoni, dances by a breakdance group, a multivision show with world champion Angelika Rainer, a dance show with LED effects, a fashion show, a speed climbing event and, finally, a large fire show. Chainsaw artist Manfred Brunner will display his skills during the opening event at Piazza delle Terme in Merano.

The whole weekend is dedicated to the sport of ice climbing. On Saturday 31 January at 9:15 a.m. the qualifying in difficulty climbing begin. 2 p.m. in the afternoon is the start of the women’s semi-final, and at 4:30 the speed climbers take centre stage. The women’s final begins at 7:20 p.m., the men’s at 8:30 p.m. The speed climbing in Rabenstein is a normal World Cup event.

The world champions in difficulty climbing, the highlight of the three day ice climbing spectacle, will be crowned on Sunday from 1:30 p.m. Before then, however, at 8:30 a.m., the men have first to win their place in the finals.

Alongside the World Championships competitions there is a colourful supporting programme. During both competition days there will be a beer crate climb for all spectators. On Sunday from 10:30 a.m. the Rabensteiner Böhmische offers an early morning pint. There will be several performances by the freestyle group Vitamin F who amaze spectators with their tricks; the paragliding group Arco will present their daring display. The ice climbing World Championships close on Sunday at 17:30 with a fire and light show.